Cogeneration, which is a combined heat and power systems, is a highly efficient system that produces two energy sources from a single energy source. Natural gas enters the gas engine (gas engine genset) to generate electrical energy and thermal energy. Thermal energy, also known as waste heat, is used in plant processes to maximize overall efficiency. Normal cogeneration systems have an efficiency of around 85-90%. The benefits of generating heat and electricity from just a single source have also effect on the electricity bill, reducing overall energy costs.

What is the basic working principle of cogeneration systems?

It establishes combined power and heat systems to extract energy from a single source instead of consuming electrical and thermal energy. Natural gas enters the gas engine to generate electricity and heat. The heat and electricity released are transferred to the facility to be used. This heat, also known as waste heat, is sent first to the heat exchangers and then to the boilers or directly to the facility. Thermal energy types vary from steam to hot water. Thermal energy is produced from the gas engine set in addition to electricity, instead of consuming heat from industrial boilers.

In cogeneration systems, the heat energy obtained from engine cooling fluids and exhaust gas is generally used in air conditioning, hot water, steam or superheated water – hot oil production. In summer, the amount of heat needed is generally lower, in this case, the waste heat being generated from the electricity generation process can be converted into cooling energy for air conditioning or season-independent process use by means of absorption chillers. 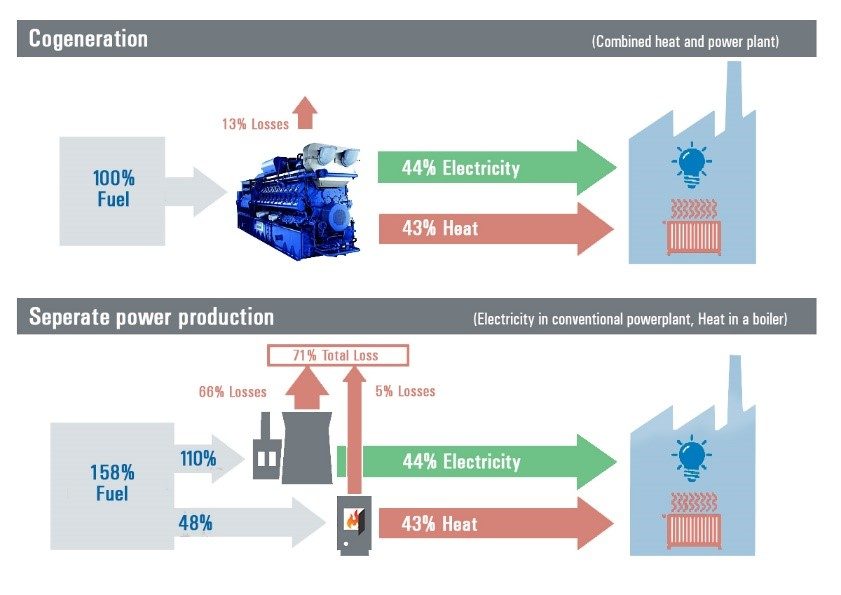 Scroll to top
We use cookies on our website to give you the most relevant experience by remembering your preferences and repeat visits. By clicking “Accept”, you consent to the use of ALL the cookies.
Cookie settingsACCEPT
Manage consent

This website uses cookies to improve your experience while you navigate through the website. Out of these, the cookies that are categorized as necessary are stored on your browser as they are essential for the working of basic functionalities of the website. We also use third-party cookies that help us analyze and understand how you use this website. These cookies will be stored in your browser only with your consent. You also have the option to opt-out of these cookies. But opting out of some of these cookies may affect your browsing experience.
SAVE & ACCEPT